When is []any not []any in Go? When generics get involved!

Will the below compile? If not, why?

It'd be quite reasonable to think it should compile, because:

But we know from the error that this reasoning is missing something. But what?

Note: any is 'an alias for interface{} and is equivalent in all ways', which landed alongside generics.

Why did Go add generics?

It'll be useful to remind ourselves why Go added generics. Without them we couldn't write certain types of functions in a type-safe way, for example: "reverse a slice". Pre-generics, we'd have to have sacrificed type-safety in some way. Either a function accepting any (AKA interface{}) and using reflection, or you might have tried writing a function accepting []any. I'll discuss just the second approach, reverseOld:

The reverseGeneric version is better for two reasons. First, the reverseOld approach loses type information: even when we pass in a slice with a non-any type like []io.Reader we get back []any:

Secondly, the reverseOld function can't work with all slices, but reverseGeneric can. reverseOld can only accept slices whose element type is an interface type:

This second restriction might not surprise you at all - if so, skip ahead. But if you're thinking something like 'Huh?! But doesn't []any mean "any slice"?', you are not alone: read on.

[]any has never meant any slice

Even before generics, []interface{} (exactly equivalent to []any) did not mean "any slice".

Values with an interface type in Go are 'boxes' for concrete types, not the concrete types themselves. Go does a lot to hide this from you for convenience, so you might not have realised, especially as some other languages don't need boxes for interface typed values - e.g. TypeScript. In Go, interface-typed values have a static type of a specific interface type. But to enable them to hold different concrete values at runtime they store the contents as pair of pointers, one to the type of the concrete value inside, and one to the value itself: 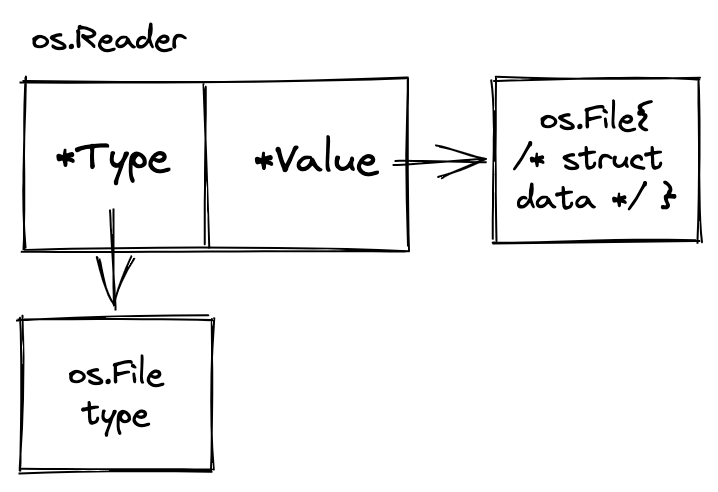 You should be starting to see that although every concrete value can be place inside a 'box' of the any/interface{}, this doesn't imply concrete values are boxed. And therefore []any, before and after generics, means "a slice of interface boxes". The diagram below shows that the backing array for a slice of three int32 is a completely different size and layout vs the array backing a slice of interface values containing the same int32 values:

This took me ages to get my head around. If this quick explanation hasn't clicked with you, I've written another post that explains why interfaces work like this in Go (even pre generics).

How are generics implemented?

We've learned type-parameters let us write a much broader set of generic functions than interfaces alone did. Now let's have a look into how Go compiles generic code. After that, we'll have enough to solve our puzzle.

Intuitively, Go's generics can be thought of as working by doing some copy-pasting - called 'instantiation' in the spec - for you. If you have a function that you want to work on a set of types, it'll 'copy-paste' specialised functions where the type parameters are replaced with specific types. For example, let's look at a function with the signature of our one function from the puzzle:

The compiler will generate us implementations of the one function above for all the types assignable to S (the spec calls this the "type set"). You'd think for any that'd be every type, a huge amount to compile! But in reality Go does this only for the subset of types that we actually pass into one in our program. The compiled functions will look a bit like the below (real output, and detailed docs), where the type parameter gets replaced with the specific types we used:

This should make it clear why S can't be considered []any. Two out of three of our compiled function implementations accept slices of a specific concrete type, which aren't assignable to []any.

So to correct our reasoning from the start of the post:

This makes sense! As said, a major motivation for generics was exactly that, writing functions that can work with all slices, including slices of concrete types.

Solving this mystery has taught us something important, and perhaps unfortunate: the behaviour of any, interface{} and io.Reader are different if they appear in type-parameters vs elsewhere. Let's look at another way (t any) and [T any](t T) differ: type-assertions. In Go, we can use type-assertions to identify the specific concrete type of value in an interface 'box' at runtime. Or, at least, at least if you're not using an interface type in a type-parameter (with what you've learned, perhaps you can figure out why?). For instance:

If you run this you'll see normal compiles (as *os.File can be assigned to io.Reader), but generic has a compile error:

This is captured in the spec, where the spec states type-assertions can be used only on an expression "of interface type, but not a type parameter". But with what we've learned we can explain why this rule is in the spec. In non-generic code, the value is always boxed in an interface value. In generic code we may use an interface type to constrain the type-parameter, but the value can be concrete at runtime in the instantiated functions. So there's simply no interface 'box' to look inside. You could imagine how Go could implement it, and indeed people have asked, but currently it's not.

We're almost done, but we should consider another new feature of generics, the ability to constrain interfaces with types, rather than just methods:

These compile errors demonstrate that although our numericString interface uses the same interface keyword as other interfaces, it clearly works differently. Indeed, the spec tell us interfaces are now split into 'general' - those with concrete type constraints - and 'basic' - those with only method constraints:

Interfaces that are not basic may only be used as type constraints, or as elements of other interfaces used as constraints. They cannot be the types of values or variables, or components of other, non-interface types.

The many meanings of interface, after generics

After generics, Go now has 'basic' and 'general' interface types, which share the same keyword, but can't be used in the same places. Further, as we've seen, "basic" interfaces types behave completely differently when they're used in a type-parameter to anywhere else. Together, I think that creates at least three distinct behaviours relating to parts of the language relating to the interface keyword:

Sharing the interface keyword between generic and non-generic code, and between basic and general interfaces, is a tradeoff. It of course avoids a new keyword, and sometimes it's intuitive: you can often use generics without understanding the mechanics and it'll work how you'd expect. But the cost is confusion - in both sense of the word. This was pointed out by some maintainers during the design discussions:

I remain concerned that this proposal overloads words (and keywords!) that formerly had very clear meanings — specifically the words type and interface and their corresponding keywords — such that they each now refer to two mostly-distinct concepts that really ought to instead have their own names

I'm not stating this tradeoff was obviously bad. But it certainly has curious implications!