Does this Go snippet compile, and if not, why?

It doesn't compile (playground). Surprisingly, although User implements Named, and the getName call is fine, the getNames(users) call is a type error.

When I first came to Go, I found it confusing that, given (1) User implemented Named, and (2) getName(someUser) compiled, that:

It felt inconsistent. It was also very different from languages like TypeScript and Java, where if User implemented Named, as well as being able to pass User to a method accepting Named:

For instance, here's the same example in TypeScript (minus switchNamed as TS doesn't have pointers) which compiles and runs without a hitch:

The mystery I wanted to solve was why Go worked exactly the same way in some places (getName(users[0])), but not in others (getNames and countSlice). To solve it I had to learn how Go's interfaces really worked.

Clearing up the mystery

First, an intuition for the difference between interface values and concrete values in Go. Imaging helping your friend move their pets to a new home. They give you two boxes, one labelled 'friendly snakes', one 'fluffy spiders'. Easy enough, sling both boxes in your car and drive! But does that scenario prove you could do the same if they just handed you the critters unboxed? Not at all.

But if that's true, how is logOne able to accept User values? Simple: the Go compiler automatically creates interface values for you where it can. The two lines below are equivalent:

What interface values are really 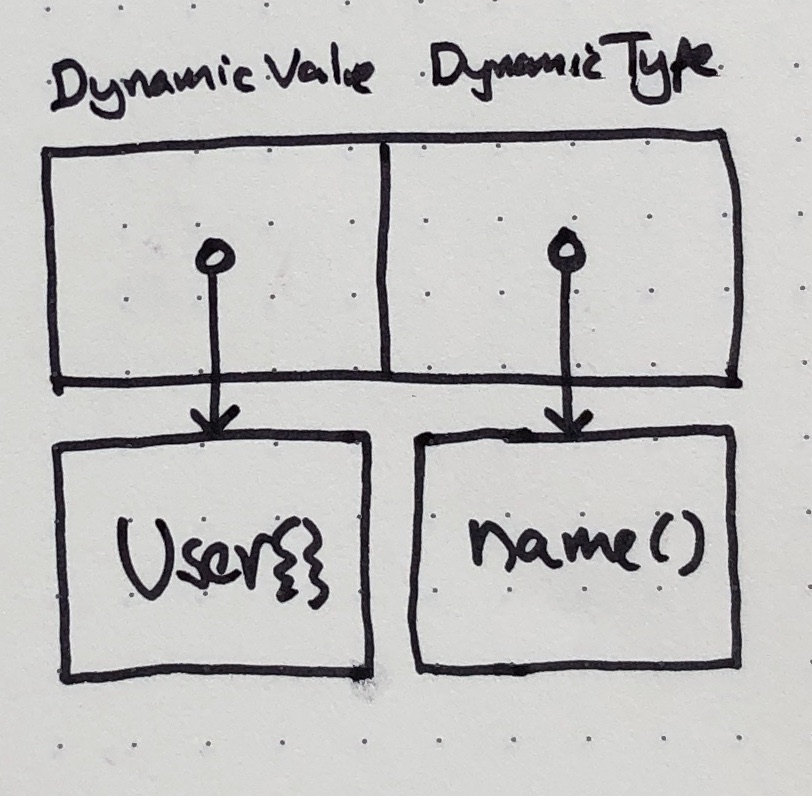 This pair of pointers is the secret to how Go's interfaces work. When a method is called on an interface value, Go follows the implementation pointer to find the appropriate method and the value pointer to be able to use the value as the receiver (or it panics if the 'box' is empty: a nil value). Thus you can see why code that works with an interface value really cannot work on concrete values alone.

A check on your understanding: why can't we pass a []User as a []Named? Try to think through what the two slices/backing arrays would look like in memory.

However, given Go can automatically allocate a Named where required, couldn't Go also allocate a []Named automatically to let you pass a []User to getNames? It's certainly possible to imagine how Go could do it. It could allocate a new slice of interface values for you, and assign the concrete User values into corresponding indexes:

Indeed, for getNames(users) this would actually work fine! But slices have mutable indexes. and many functions mutate the slices they're passed. Can you see why automatically creating new slices to pass in would not work as desired for such functions? For instance:

The implicit allocation would stop switchItems from working as we'd only be affecting the newly allocated slice/backing array - ns in the example above where I showed you what Go would have to do to make it work.

Again, Go's helpful implicit conversions can make this confusing. In the loop above where we create a []Named from a []User, the var n Named = u is unnecessary, we could just do append(ns, u /* u is a User value */). Now we know that's because Go can safely, and implicitly, create the required interface value for us.

Why couldn't Go do something clever to let us pass a pointer to a User to a method accepting a pointer to Named?

Thanks to Campbell Morgan, Iheanyi Ekechukwu and Stephen Bradshaw for reviewing this and offering their wisdom!

Next: A pandemic of bubble maps